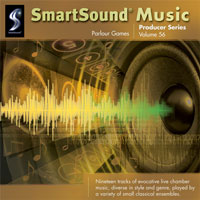 Royalty Free French music can’t help but lend an air of high society polish to your video production. Even innocent, whimsical French Waltz, from the Parlour Games album manages to sound cultured at every turn, with Chamber Group, piano, and violin consorting to bring out the posh in your next Indie film, Short film, or Biography.


Also from Parlour Games comes a poignant, lyrical offering for a Biography, Tribute or Memorial, or Short Film, 1910 France, Its gentle strains tell the tale in Classical, Ballad style, with Violincello.

Royalty Free French music takes a vacation through the countryside with Cha Cha to Cherbourg, from the International Traditions album. This relaxed acoustic venture from the Strata series features strings, accordion and electric guitar, and adds a festive note to Home videos and Travel features.

From the same album, check out two traditional French children’s songs when your project focuses on whimsical, upbeat fun for kids. Sur Le Pont D Avignon dances out a perky note on the accordion, while Frere Jacques, adds clarinet and flute to the ensemble.

J.S. Bach paid tribute to the dignified, refined side of the French sensibility with his "French Suite," featured in Smartsound’s Baroque Guitar, from Expressive Textures. This classical ballad adds a gentle, serene background theme to Spoken/Word Narration projects as well as Tribute/Memorial or Wedding scenes.

Though the beautiful country of France has itself has endured periods of tragedy, warfare and tumult in the course of its history, the essence of French music remains lyrical, cultured, and always, always romantic!