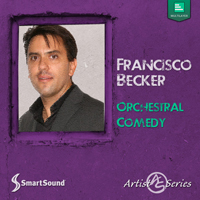 We’ve written a lot about different styles available from SmartSound’s thousands of royalty-free music tracks, but one category that is hard to find is Background Comical Music. Yet there are a lot of videographers making witty, funny videos who might like a broad selection of background music that will keep and enhance the comic feel of their work. The wrong track can easily spoil what might otherwise be a comic masterpiece, if only the audience could connect with it the way the producers intended. Using SmartSound’s Free Music Search, however, it’s easy to find and select just the right track for any comedy.

For example, if a funny video or commercial is aimed at kids, there’s Strolling Down the Path from the album, Power Play. It’s a pop/rock-style track with acoustic guitar and electric bass, as well as mandolin, and the energy it imparts make it great for kid-focused works.

But for a goofy secret agent, take a look at Undercover Operation off of the Orchestral Comedy album - a studio orchestra combine with electric bass and xylophone to deliver a background track that is at once upbeat and crazy... Go, go, device-based appendages!

For a mysterious, fantastical investigation in the comedy vein, there’s Whimsical Adventure, also off the Orchestral Comedy album. It’s a bit more sophisticated than others, including orchestra, flute, snare drums and other instruments, lending itself well to comedic action scenes.

And, of course, there’s always a need for school-house shenanigans in High School and College comedies, for which Rooftop Party from the album Contemporary Pop Beds is ideally suited. It’s lively, pop/rock beats perfectly fit the comic vibe of teen and young adult school movies, shorts and commercials. It has a great blend of electric guitar/bass, synthesized beats, and general pop/rock goodness.

These and many more comical tracks are available from SmartSound, but better yet, with nearly infinate choice of variations and instrument blends, and the ability to instantly tailor track length to perfectly fit the scene at hand, videographers will have no problem with timing - critical to any comic bit.